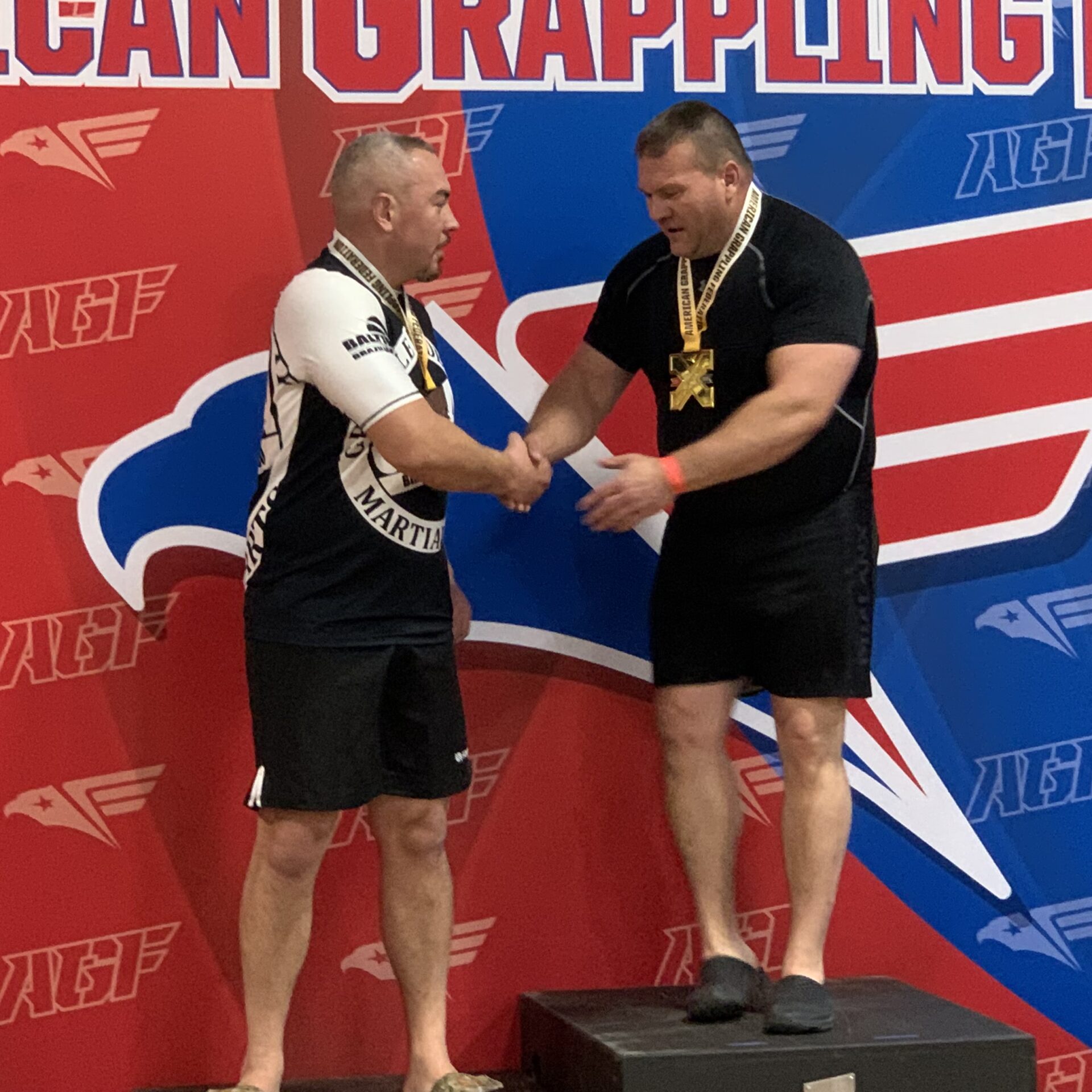 I’ve always said that the more someone is intimidated by the gym, the more respect I have for them for walking into it on that first day.

Recently, I’ve gotten to experience that myself – stepping into something I was intimidated by – competitive martial arts. 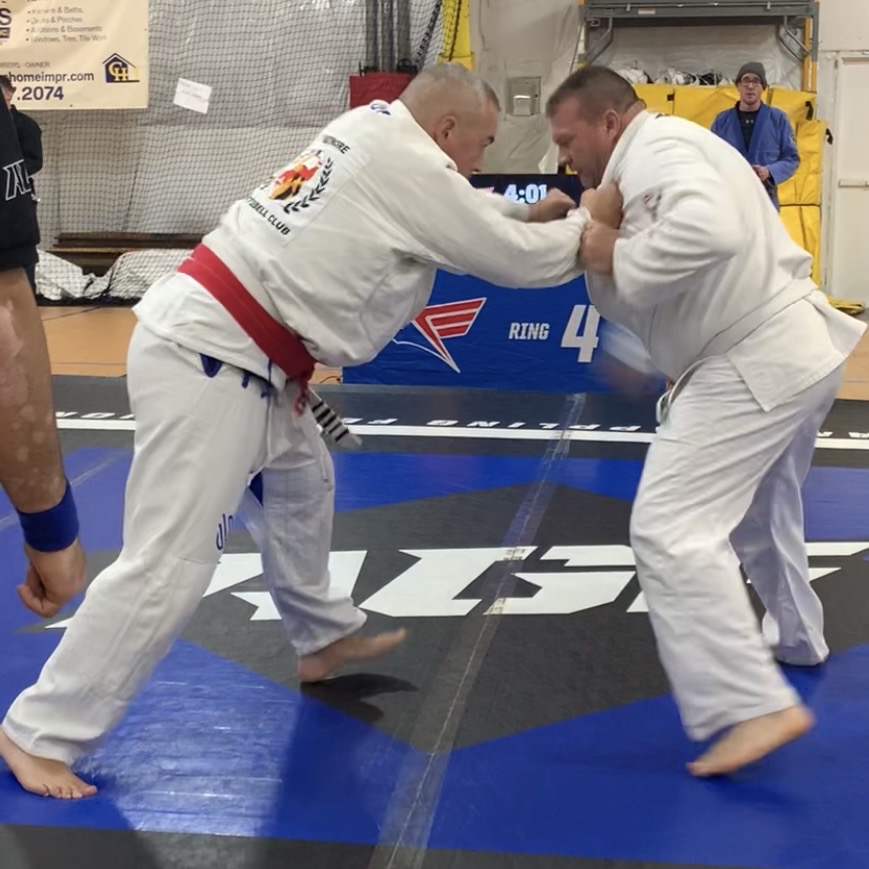 About a year and a half ago I started training in Brazilian Jiu-Jitsu. If you’re not familiar with BJJ, it’s a grappling art that utilizes chokes and joint locks to submit an opponent.

Although I do have some experience with martial arts, I’ve only ever practiced striking like boxing and karate. Grappling is a different animal; much more up close and personal.

And I’ve never competed in any combat sport.

Here’s what I wrote about those two experiences:

I competed in my first jiujitsu competition yesterday. My first martial arts competition ever. I had two matches in the senior (40+) ultraheavy (235lb+) whitebelt division.I lost both of my matches.

In strength competitions, I always say your only goals are to stay healthy, have fun and PR, if you can.

I went into this competition with the same mindset, except winning was part of my plan. I expected to win, perhaps foolishly, so of course I was disappointed in that.

However, I knew that win or lose it would be a net positive experience.

First of all, this was the first time I tested myself like this. The training, the nerve and the thrill of going head to head with another human being in a combat sport, it was exhilarating. It was humbling. It was motivating.

Secondly, I grew as a martial artist. I am a white belt. I am newer at this than everybody except those who haven’t started yet. If I ever reach any level of mastery of jiujitsu, I want to have earned it, regardless of the color of my belt.

Third, respect. As is many things in life, there’s theory, practice and testing. I’ve long since respected the theory of self-defense and those who practice it, but testing it in the arena is another layer of respect. I don’t care if other people respect it, because I have more self respect now.

Finally, I learned some things. A lot of things I can’t fully articulate yet. I learned things about myself, about the sport and about the example I set to those around me. Good stuff… and I’m looking forward to what’s next! 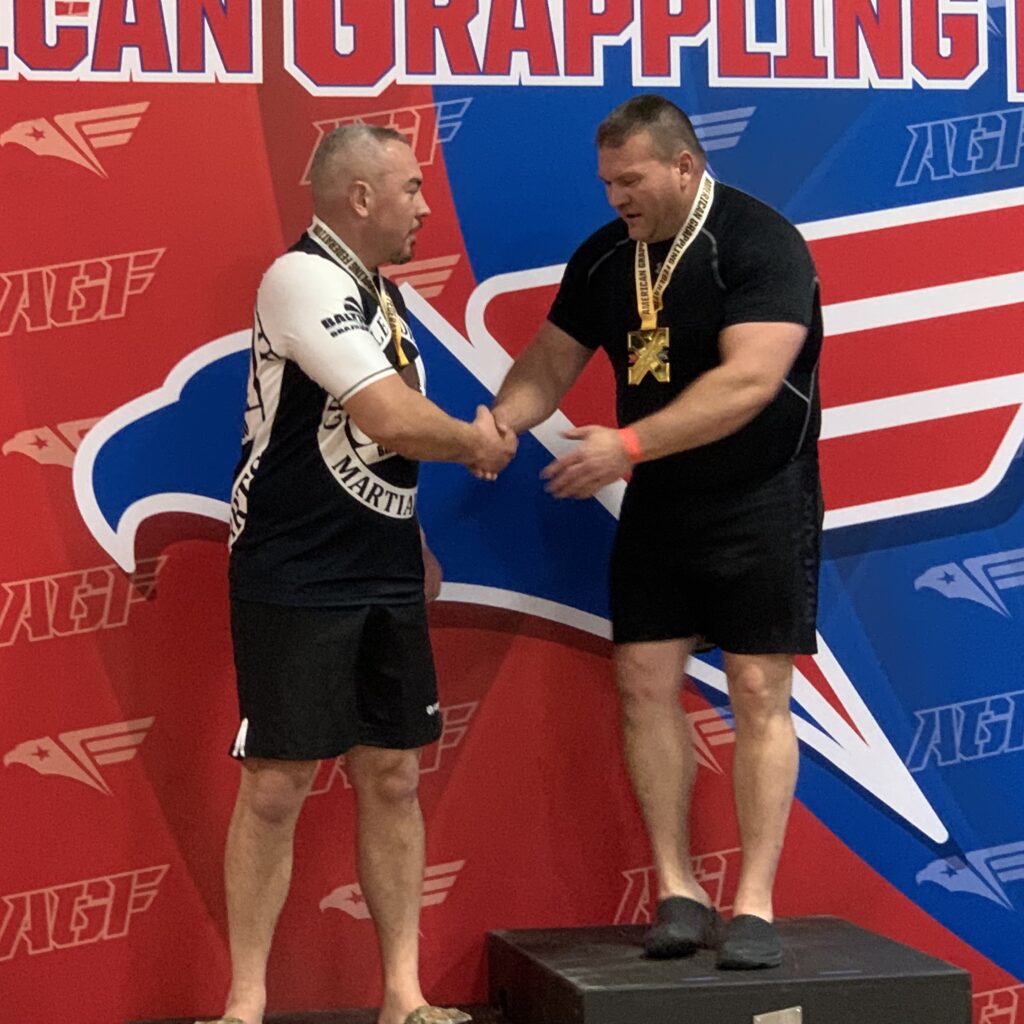 I competed in my second jiujitsu tournament this past weekend. I had two matches and won them both, earning me gold.

Less than a month ago I was in this very arena and lost both my matches; in front of my son, my dad and my wife.

Not that I got embarrassed, but I was disappointed to lose, obviously. I wanted my family to see me do good.

However Jess pointed out that it was good for the boy to see me lose, because he’s got a few things to learn about losing. He’s a “take my ball and go home” kind of loser. But to see his father take a loss, be gracious in defeat, and come back a few weeks later and take 1st place, that’ll probably leave an impression. 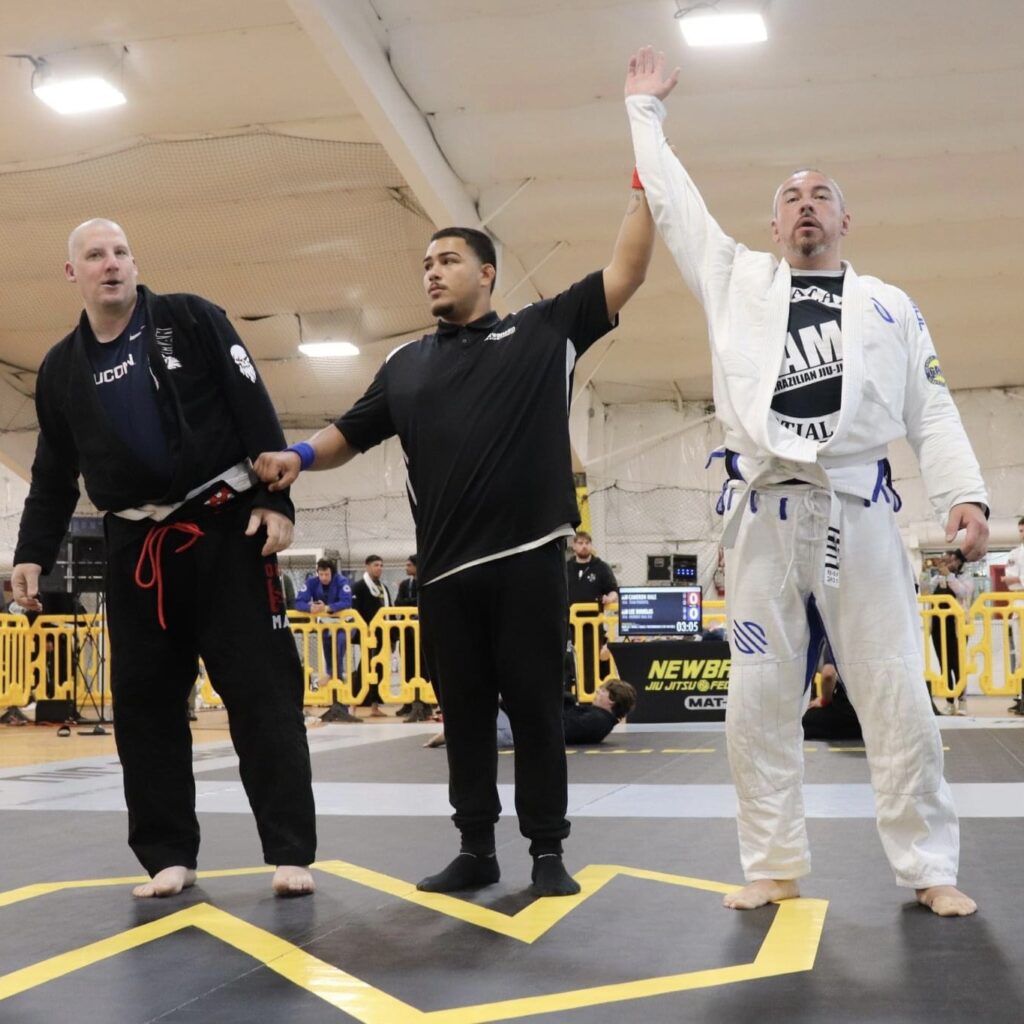 Similar to the impression my father left on me. Not only has he been a martial artist all of his life, but he didn’t start aikido until he was nearly 50. Now he’s 74, a 3rd degree blackbelt (with blackbelts in 3 different arts) and still trains. He STILL leaves an impression on me.

Now I get the chance to lead my children by example. I WILL continue to train until the day I die. I don’t know what the future holds for me as a “jiujitsu-ist” (as my daughters call it) but I’m pretty fired up about it!

Lifting will always be my first love and that’s what will keep me strong and healthy long after competition is over, but for now I’m looking forward to the next tournament. 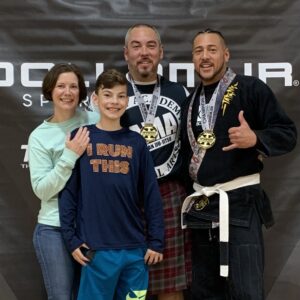 From these experiences I learned about facing fears and trying something new that I suck at. I learned about stepping out of failure and defeat and trying again. Now I realize who is watching and how I react to failed attempts (or successful attempts) sets an example to those around me.

Isn’t that the same with fitness?

How many times have we failed to lose weight or follow through on our fitness goals?

It really doesn’t matter how many times you fail, as long as you keep trying. There will always be setbacks, obstacles and failures. How you respond to them is what counts.

That’s what other people see. Sure, they see when you’re winning but if you’re winning all the time that gets uninteresting quick. When you fail and come back to fight again, that shows perseverance and tenacity. And that’s admirable.

A case could be made that it doesn’t matter what other people think, but I would argue that if you have people in your life whom you care about, it matters a lot! 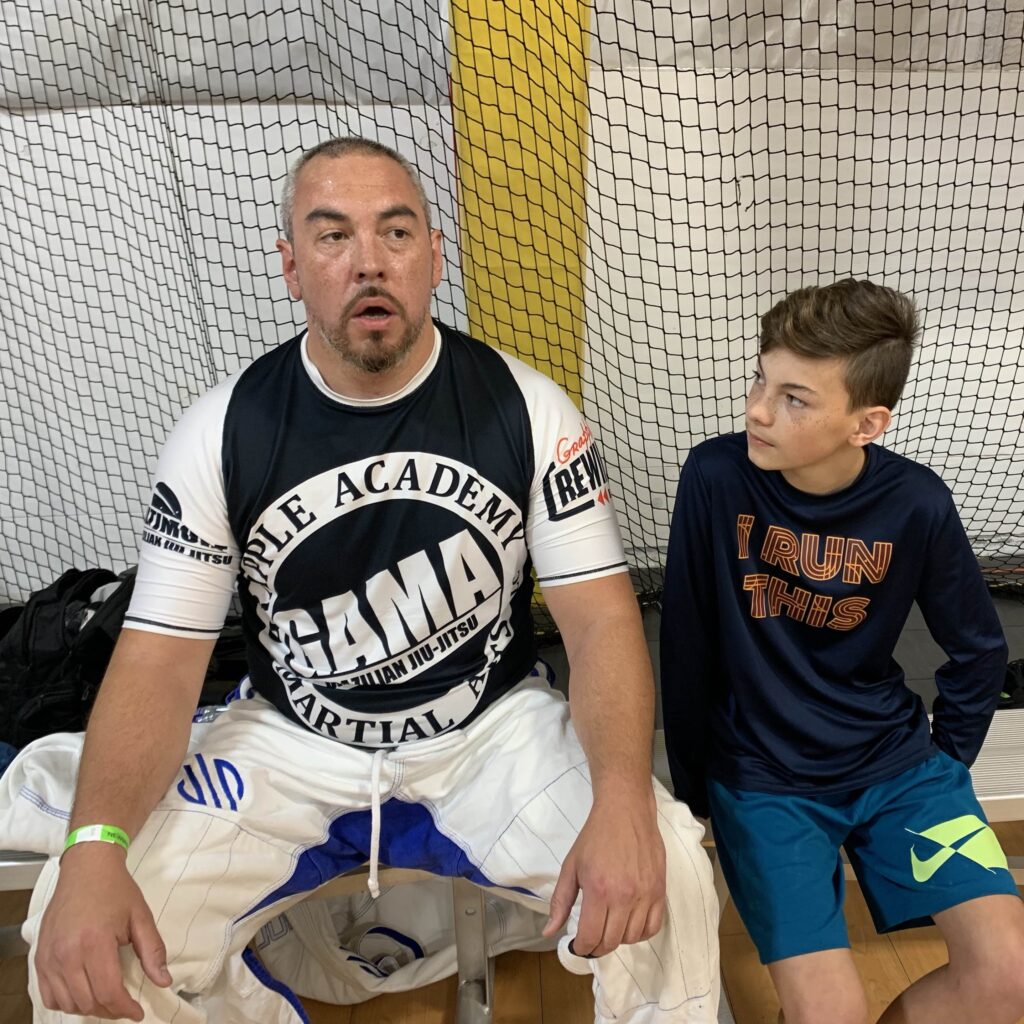 So get up, go running and get to the gym. Set big hairy goals that intimate you. Keep trying until you succeed. Then set your sights on something even higher.

You can do this!

Do it for yourself, do it for the people who look up to you.

PS – Special thanks to Greg Lew and Rob Sullivan for training and coaching me, and all of my teammates at Grapple Academy and Baltimore Brazilian Jiujitsu who help me improve. 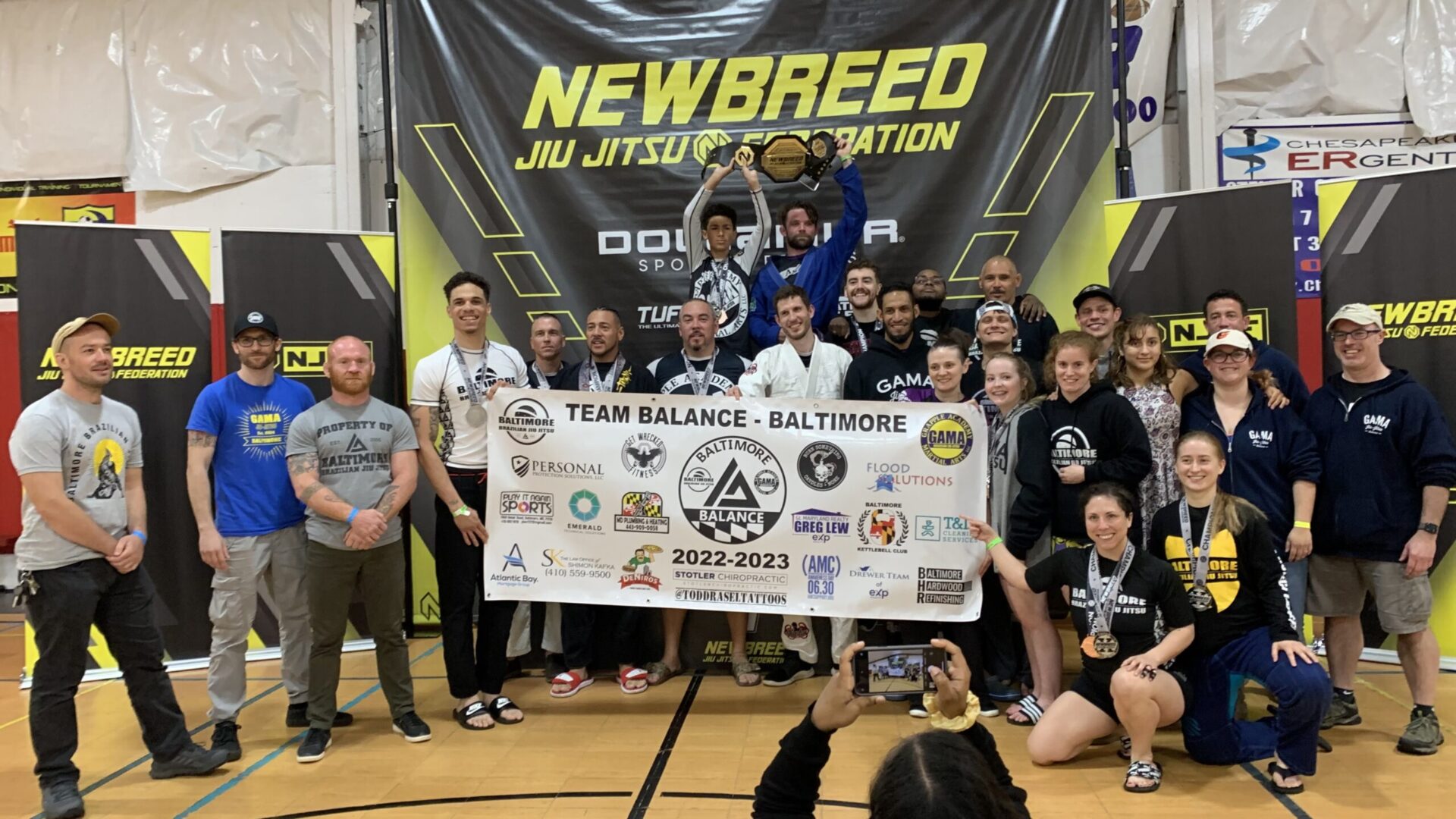