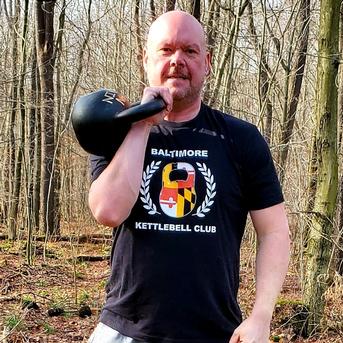 What Injury Has Taught Me
By Chris Steele

I have an injury. My right shoulder. I said: I have an injury. I did not say that I am injured. My shoulder is injured, but I am not. I’ve learned a lot from this injury. The most important thing injury has taught me is to separate the injury from myself. I’m sure that sounds strange to some, but by treating the injury this way I’ve found the freedom to keep training and I’ve learned a lot about my body and mindset.

On a sunny Saturday morning in June 2019 I was training at one of my favorite places in the world – The Baltimore Kettlebell Club. I was six months post-op from a lumbar decompression and was feeling great. Back in the swing of things and training without restrictions. I was in the mood to get after it.

I’d put in a fairly intense training session that involved progressive barbell pulls and heavy-ish farmer carries in the parking lot. I was heading back to the start line with some heavy bells in hand and I felt my form slip for just a moment, and I lost that locked-in feeling in my right shoulder. I felt something click, but nothing painful.

Instead of stopping at that moment, I was motivated by my ego to finished my carry. The following day I practiced barbell cleans with a manageable load. That little feeling I had the day before now presented itself as pain. Damn.

Since June 2019 I’ve been dealing with that injury. Specifically I have a partially torn biceps tendon, and partial tears in two of the four muscles that comprise the rotator cuff. The doctor describes my tendon as “migrating.” In other words, because of the tear, it moves around and it hurts like hell when it does.

I’ve been in intensive physical therapy for four months. The cuff tears seem to be responding to PT. The tendon is not. I will be having repair surgery in March to give the long head of the bicep tendon a more stable attachment. The procedure is called a bicep tenodesis. I’ll then undergo another four months (at least) of PT.

I went through some emotional phases after the injury event. At first I tried to work through it. The pain worsened. Then it began to impact my entire life. I became depressed and stopped training for almost a full month. Bad idea. A combination of the intense pain and a kick in the ass from Dan Cenidoza prompted me to take action. I got a diagnosis, a physical therapy plan, and a new outlook on training. In this process I realized that I could learn something from the injury.

What injury has taught me about my body:

Injury has taught me a lot about my body. I’m not an expert on exercise physiology, but I’ve learned from experts over the years. Dan and the folks at BKC and my Physical Therapist – Dr. Victoria Rhodes – have taught me so much about why I got injured, what I need to do to recover, and how to prevent it from happening again. I’ll share some things I’ve learned. These aren’t in any particular order.

I’ve learned about the vital role of the small stabilizing muscles in training and performance. These smaller muscles such as the superspinatus, subscapularis, teres minor, and even the subclavius are essential in supporting the proper function of the shoulder. Prior to this injury I focused on the big muslces: delts, lats, pecs, traps. These are so well known to us that we shorten their names. These are the workhorse muscles that make up a lot of our shoulders’ shape and physique. But these large muscles, and the joints they help comprise, are all stabilized by vital little muscles. I’ve learned how to strengthen and stabilize these muscles through physical therapy.

I used to ignore the little kettlebells on the end of the rack. I didn’t think I could benefit from them at all. It never even entered my mind that a little 8kg bell could be so effective. I’ve learned the value of the light bells to recruit these small muscles and to keep the big muscles on the sideline. For example, a very effective exercise is the 8kg bottoms-up kettlebell carry. That’s right, a lil’ 8k.

By keeping the weight light and inverted, the lat is not tempted to turn on to carry the load. This brings those smaller stabilizing muscles into the picture. The rotator cuff muscles work hard to support the bell and keep it from moving forward, backward, or side-to-side. I can share all of my new found movements for anyone who is interested. The point here is that we can’t afford to neglect these little muscles.

Gains will come faster by including the stabilizers in the training plan. I’ve experienced it first hand. I just hit a PR by strict pressing a 40kg bell with each arm – yes, the injured arm too! I even did it twice just to make sure it was with proper form. My PR goal before surgery was a 40kg and I hit it. Only through PT, a good training plan, and knowing my limits was I able to do that. A lifetime goal is to strict press a 48kg bell with each arm. My therapy/training plan immediately after surgery is to set myself on the path to doing that within two years.

Next, I’ve learned – AGAIN – that the core is the key to it all. I had no idea how much core work would be involved in rehabbing my shoulder. The thing is, the shoulder is attached to the thoracic spine which is connected to the core. So the combination of the rotator cuff, the thoracic, and the core is a vital one that cannot be overlooked. I’ve had great success with shoulder taps, kettlebell drags, banded Y squats, and side-plank rows. The core is absolutely the foundation of these movements. It’s now difficult for me to imagine having healthy shoulders without involving the core.

I’ve learned how vital the mid-back – or thoracic – is to shoulder health. My thoracic spine was tilted forward. My therapist explained that it’s one of the most common things she sees as a contributor to injury. She talks about “shoulders back and down” as the desired position. My shoulders have always been down, but they were forward. This creates a dysfunction in how the shoulder is supported and is a risk for injury. The thoracic isn’t the easiest part of the body to train, but it is vital to proper training posture. I feel much better about being “back and down.”

In terms of physical lessons, what injury has taught me is to be patient with my body as it catches up to itself. What I mean by this is that muscles respond quickly to training. I’ve learned that muscles are overly simple and just do what they’re told to do by nerves. Nerve tells muscle to flex, they will. Tell them to grow, they will.

The issue here – that I’ve learned from Craig Cusic and Dan Cenidoza – is that the rest of the joint infrastructure takes longer to respond to the training input. The various attachments at joints need more time to catch up to the muscles. As I understand it, this is a cause for many injuries. People see their muscles responding, so they jump the weight up and then experience an injury because they haven’t spent enough time at that weight. This is a strong argument for the concept of “step loading.” But, again, I’m just a guy who trains and not an expert. So take that with a boulder of salt.

This concludes part one of my posting on what I’ve learned from my shoulder injury. I’ll need to type part two with one hand as I’ll be in a sling for about a month. Part two will cover what my injury has taught me about mindset – both in the gym and out.