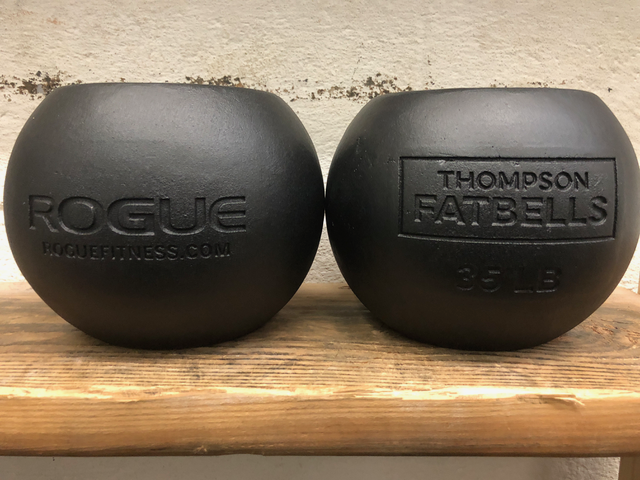 Innovation in strength training doesn’t happen often when it comes to “free weights”. Other than barbells, dumbbells and kettlebells, what else is there?

Machines and odd-objects aside, there’s only so many ways to put a handle on a weight and lift it.

For over a century, the barbell has reigned king, and rightfully so.

There’s simply no better way to lift the most weight possible than with two hands on a plate loaded bar.

And it doesn’t it mean that the Fat Bell cannot also occupy a special place.

You can think of it as a kettlebell with the handle in the center of the ball. 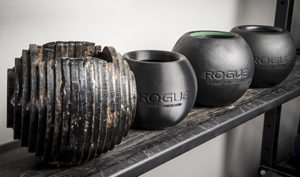 Not Thompson. He was one of the first big names in modern powerlifting to embrace kettlebell training. I remember reading about his RKC certification in an interview in Hardstyle magazine right around the time I got certified. 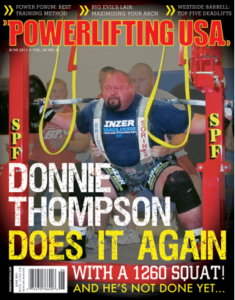 If I remember correctly, Donnie praised double kettlebell swings in helping improve his deadlift and was big on using kettlebells for rehab / corrective exercises.

So here’s a most-stubborn-of-all barbell guy (powerlifter) who found a place for kettlebells in his training and succeeded because of it. Cool.

I was going to give Fat Bells the benefit of doubt anyway, because to me, its just another way to lift weights.

I’m a lifter at heart. And I don’t discriminate between ‘bells anymore than I do logs, stones, hammers or maces; they all have a special place.

So far, here’s a few exercises I really like…

Notice how my wrists turn at the top/bottom of each rep.

My favorite curl variation now made better with the Fat Bell. It’s simply a smoother motion and it feels better.

The weight is evenly distributed around your hand so when you supinate/pronate your wrist you don’t even realize you’re holding a weight.

So the Zottman curl allows you to use more weight in the reverse curl since you’re only doing the negative. It’s IMO the best way to train your elbow flexors.

To be completely honest, the thought of doing Zottman curls with Fat Bells is what sold me on the idea and it was the first thing I did when I took them out of the box. 🙂

Not by the handle, but by the rim.

I don’t think the Fat Bell improves on a kettlebell swing; it doesn’t feel any better to me and as the weights get heavier I think you’ll want that handle offset from the center of mass.

Swinging by the rim however, brought a fun grip challenge into play.

You’ll need to use what rock climbers refer to as a “crimp grip”. 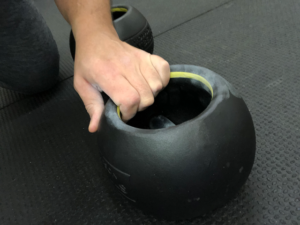 The grip will obviously be the limiting factor here, but personally, I like the idea of not having to do 100+ swings to feel like I’m getting a workout.

Swinging like this probably won’t do much for your endurance, but it will help you build a vise-like grip and that transfers over to everything we do in strength training.

This is where things get interesting.

While I didn’t care much for swinging the Fat Bell by the handle, snatching is kinda awesome!

It feels like a very primitive movement. I imagined myself a caveman slugging away at large predatory animal I had just killed with my bare hands.

It’s a kettlebell snatch without an obvious lockout. No turning the bell over and no banging of the wrist.

Almost like a muscle snatch, the Fat Bell snatch lends itself to hardstyle technique where you pull the weight back down.

I can see powerlifters doing this as GPP, fighters doing it for brute strength, and kettlebellers doing it to save their hands from the wear and tear of high rep snatching.

No doubt it is the snatch test that is the biggest hurdle to most kettlebell lifters and would be instructors.

The Fat Bell snatch would be a great compliment for those working to improve their 5-10 minutes snatch numbers.

It’s a near identical movement but no handle rotation means less friction and fewer torn calluses.

Like anything else, Fat Bells are going to have pros and cons. So far they have been a fun challenge and I am enjoying the training. With only a couple sessions I can feel myself exploring new movement possibilities.

Exercises that have never felt right with a dumbbell or kettlebell feel right with a Fat Bell. The ability to adjust between supination and pronation so easily creates a freedom that allows your body to find what it considers “good form”. I was able to avoid painful movements that have plagued me for a long time with a simple change in position that made the exercise feel therapeutic.

I see the Fat Bell as being great for accessory movements and anything involving arm work. In the next article I will talk about outside-the-leg swing variations (MUCH better than with a kettlebell), bench work and isometric holds. Much more good stuff to come!

In the meantime, I’d definitely recommend getting a pair for yourself to see what they can do. Men should probably start off with no more than 35lbs and women 18lbs. Fat Bells are available at www.roguefitness.com

PS – Special thanks to my gym family for gift card over the holidays. Fat Bells is what the purchase went to. I’ll have a few more pairs in soon!

PSS – If you liked my Fat Bell introduction, check out the Kettlebell Start Up Guide and sign up for my newsletter for more training info…