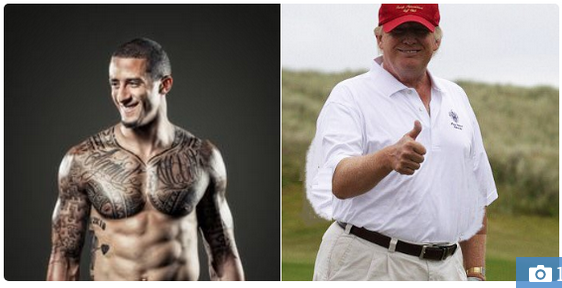 I’m calling out all of the athletes and fitness people who are comparing their bodies to Donald Trump – we get it, you don’t like the president.

But unless you’re in your 70’s as well, it’s kinda silly.

Even if you are a buff senior citizen, when did it become OK to make fun of someone elses body?

This will be the first time I’ve come out and defended the president online, but people shouldn’t be cutting the man down because he’s 15lbs overweight.

For the athletes out there, you get paid to use your body, and I’m a fan of your work. You are the “man in the arena” as Teddy Roosevelt said. Don’t be the critic!

[To be fair, it’s mostly twitter users and trolls that are creating these memes like the Kaepernick / Trump one above, but the fact that it’s happening is too bad.]

“It is not the critic who counts; not the man who points out how the strong man stumbles, or where the doer of deeds could have done them better. The credit belongs to the man who is actually in the arena, whose face is marred by dust and sweat and blood; who strives valiantly; who errs, who comes short again and again, because there is no effort without error and shortcoming; but who does actually strive to do the deeds; who knows great enthusiasms, the great devotions; who spends himself in a worthy cause; who at the best knows in the end the triumph of high achievement, and who at the worst, if he fails, at least fails while daring greatly, so that his place shall never be with those cold and timid souls who neither know victory nor defeat.”

For the fitness people, if you’re a trainer posting shirtless selfies next to Trump to sell your product… that’s a cheap trick.

You’re taking my industry and polluting it with vanity and self absorption.

You claim to be selling health and fitness but your image doesn’t fit everyone. Especially not senior citizens, which Trump is.

If I’ve learned anything as a trainer, it’s that everyone has different life experiences. Everyone comes with their own list of injuries and inabilities, and those things only accumulate as you age.

People also go through different stages of life. We all have highs and lows, and struggles that nobody else knows about (sometimes not even ourselves).

Being the leader of the free world might be one of those jobs that take up your time and energy.

So if someone doesn’t meet YOUR fitness standards, unless you’re their coach or trainer, just keep your mouth shut. It reflects poorly.

I will continue to reject the shallow attempts to sell fitness to people. Digging at peoples sense of self worth because of the way they look is a dirty tactic.

If you thought this post was going to be political, sorry, but that was just to get you to read my blog 🙂

That doesn’t mean I didn’t want to take the opportunity to talk about something real.

Call it fat shaming, call it mud slinging or call it fitness marketing. It doesn’t belong in an industry that is meant to promote health.

PS – If you liked this post, check out the rest of the site. There’s plenty more insightful articles on the blog, a free ebook, programming and online training services. Otherwise…