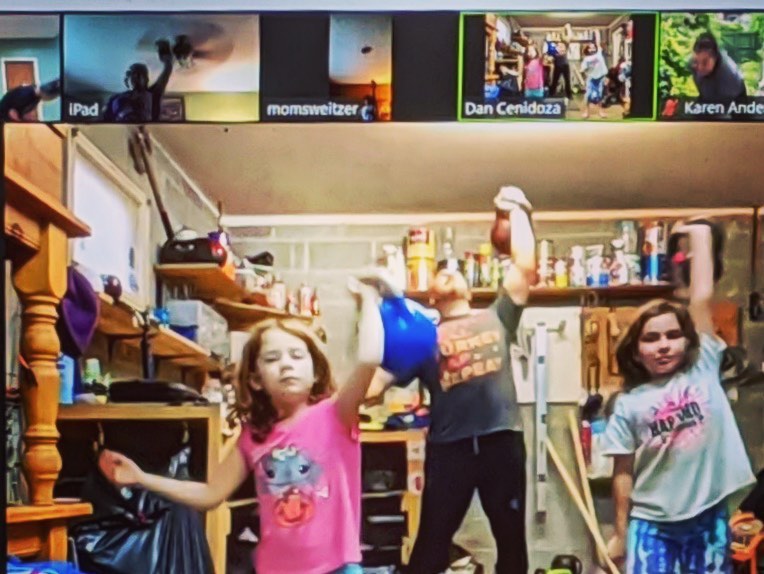 6 weeks ago I started doing overhead presses everyday in a program I called my #quarantineroutine The reasons for doing the same lift every day were twofold: 1) to inspire the members of BKC to continue training during the shutdown 2) just to see if I could.

Conventional bro science tells us that we cannot train the same muscle groups every day. I’ve never really questioned that logic because it seems to make sense. Your muscles need time to recover and overcompensate from your training in order to get stronger.

But what about the heavy laborer that has to work 5-6 days a week?

There’s guys that do incredibly intense manual labor not just every day, but all day long. I wonder if their muscles got the note that they need 24-48hrs to recover?

The body is an amazing thing that will adapt to almost anything. Why not press everyday program?

It’s something I wanted to test out. And so, on March 30, when the stay-at-home order went into place, I started pressing a 32kg kettlebell every day in my Zoom workouts. I used Pavel’s ladder program as described in Return of the Kettlebell, with slight modifications.

A couple things to note:

It’s important to maintain the proper ratio of pushing and pulling exercises. The antagonist muscles support the effort of the agonist. Too much of one and not enough of the other will lead to imbalance in the system.

You see this often with high school age boys when they first start training. Many young men get themselves into trouble by concentrating on the bench press while neglecting pull ups, rows, cleans, etc. They develop their chest muscles, and without the back muscles to counter it, their arms get forward giving them that rounded shoulder look. They’re bulky in the front but skinny in the back, and it is precisely that imbalance that sets them up for joint problems and soft tissue tears.

That means if I did 5 presses, I either did 5 pull ups or 15 rows. My aim was to make each set of presses about as equally difficult as each set of pulls. It’s all about balance.

I believe that this, in part, is what allowed me to do a press everyday program.

The other part of my ability to do this routine was really just grit and determination. I had to BELIEVE that I could. Sometimes I had to MAKE myself do it.

I still got it done.

I suppose I could have trained everyday using different lifts, but I didn’t.

One last thing that I think made this possible was the fact that I was getting 8hrs of sleep each night. I don’t recall a time in my adult life where a full nights sleep was the norm. The stay-at-home order effected people in different ways. For me personally, it was largely positive. The stress of operating a business is/was greater than the stress of unable to operate it. The feeling of not spending enough time with my kids was more stressful than spending 24/7 with them. And sleeping until I awoke naturally was a lot more peaceful than the alarm going off at 4:30am.

I love being a gym owner, and I love training people, but it comes with early mornings, late nights and a lot of things to manage in between. It’s definitely a high stress job with not enough sleep.

I’m not sure that an everyday program would have worked for me had I not been sleeping as much.

What were the results?

Unfortunately I didn’t take any specific measurements (bodyweight, anthropometric, strength tests, etc) before the shutdown. It wasn’t at the top of my mind. So I don’t have much before and after data to compare to, but I can tell you that my arms are HUGE right now!

Back, shoulders and triceps are especially swole and rock hard. The 32kg feels like a 16kg. My endurance is through the roof! Best of all, no injuries, I feel better than I have in a LONG time!!!

Other than that, I have a newfound sense of discipline. I imagine it’s similar to what soldiers feel like after pushing past their limits in bootcamp (albeit at a much lesser, and well rested, scale). It’s like I know I can step up to the plate anytime, day after day, and perform at a high level like it’s my job.

In the very near future I will probably test my 1RM and/or my rep max. I will report back with those results.

In summary, you can train everyday. You can train the same lift in an everyday program. It’s important to use the appropriate load and balance it with the right ratio of push to pull. You need to be getting adequate sleep and be of relatively low stress. Most importantly you need to believe you can do it, commit to it and just get it done.